Living in Montreal is exciting, invigorating and refreshing as most adventures are. Since moving here in February 2012 I think we have adapted brilliantly but we do miss our hideaway in France. One of the biggest changes for us was moving from a house in the country into an urban apartment with no garden. The Rascals were brought up with the room to roam and they spent most of their precious hours in France dressing up and running around making noise.

There was space both inside and outside to create the cacophony that children love to do, to run riot and dance up a storm. The freedom to let their imaginations fly. Although our apartment in Montreal is a good size, we are on the first floor with some rather unlucky neighbours beneath us. I cannot help wincing at every little leap and thunderous thump which is probably every second of every day. They are simply not used to noise restraint and neither are we.

When friends used to visit us in France, they waxed lyrical about the space which I took for granted then but can finally now appreciate. Maybe I should be more of a Tiger Mum but what I really want to do is give them the luxury of being imaginative, curious and carefree. We could all do with a few of those ingredients in our lives. Roll on holidays, I can’t wait to let my Rascals loose at our hideaway in France. 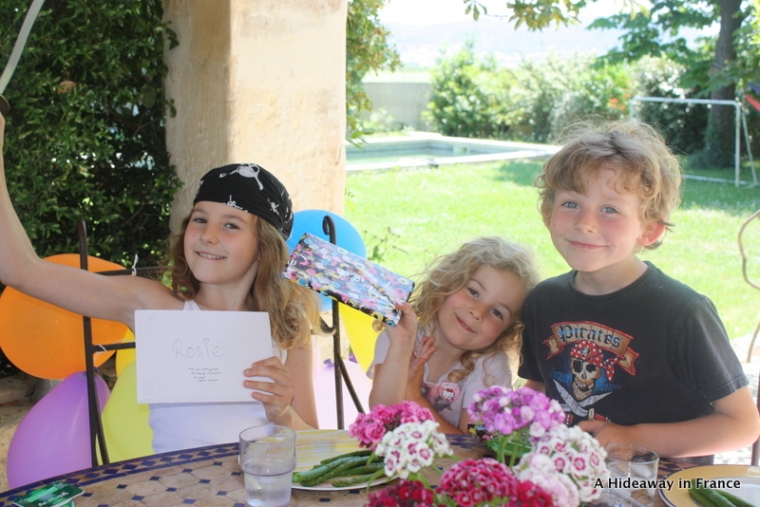 “We don’t stop playing because we grow old;

we grow old because we stop playing.”

We love our garden gate which divides the front garden and pool garden. And we are thrilled France is now back on the Amber list - yeah! If you need some sun and a break in the south of France we have had a few last minute cancellations for late August and some September weeks. Contact details in bio.
Fig season is almost here and luckily there are quite a few fig trees only 5 minutes away...🌿
A slightly rainy Sommières market this morning but still just as beautiful and bustling!
Bursts of colour is an absolute must for our outdoor furniture here!🌺
Neil on the tractor today caring for our beautiful olive trees in the field...
Wonderful new spice stand at our favourite Calvisson market this Sunday🌻

A Hideaway in France